GTCA part 3: Why you should consult with a lawyer before filing a Notice of Tort Claim 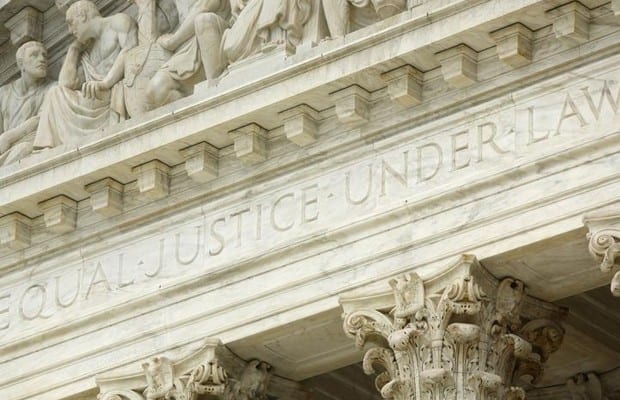 I’ve previously explained that prior to filing a lawsuit against the state or any subdivision (county, municipality, school board, etc.), you must first file a Notice of Tort Claim. Thereafter, you must wait up to 90 days for that governmental body to review your claim, and either choose to pay it or deny it. And even though the filing of a Notice of Tort Claim seems simple, I want to caution you that proper wording in your tort claim notice can be critical to your rights in a subsequent lawsuit later down the road when the City/State denies your claim.

In Oklahoma, the Tort Claim forms you get from your local municipality can be not just confusing, but deceptively tricky.

In certain situations, the government agency will actually inform you of your right to file a claim. They may even hand you a form. All of these actions tend to suggest that when the government injures you or damages your property, they will take care of it just as soon as you complete their form and let them review it.

The Municipal employees at Oklahoma City will make it sound easy: “Just complete this simple form.” 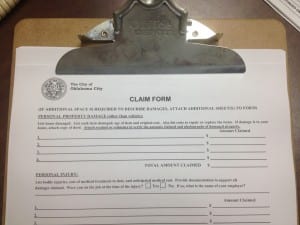 For instance, I recently represented a family who’s home was flooded with sewage because the City failed to maintain the lines. The family called the city to report the back up and some of the City’s sewage workers gave the family some forms to fill out. The family was under the impression that if they completed the forms and identified the damaged goods (furniture, carpet, etc), that the city would just pay it. The city didn’t pay it.

Thankfully, they hired me soon after and I was able to file an amended claim, where I added personal injuries (annoyance, inconvenience, and nuisance of having raw sewage in your living room). Had I not done that, the family would have been limited to recovering only $25,000, the maximum cap on property damage, as explained in my last post. By amending their claim to include personal injuries, I preserved their right to pursue damages of $175,000 per individual in the lawsuit.

And since I was able to preserve each spouse’s right to sue for up to $175,000, once we did file suit we were able settle their case for three times the original limit from their first claim, which much more adequately compensated them than the original limits of $25k. But this was possible only because they hired me within days of filing their own claim was I was able to preserve their rights under the GTCA.

A recent case shows why it is critical that you consult a lawyer before filing a claim on your own.

I actually know of a case in Oklahoma City that went to trial over this very issue. The family suffered the horrific experience of having hundreds of gallons of sewage flood their home. The city’s sewage workers gave the family the Tort Claim forms to fill out, and the family did so, timely filing them and waiting for the City’s response. The City denied the family’s claim and refused to pay any compensation for the damage it caused. So the family the right thing and they hired a lawyer to file a lawsuit.

The lawyer filed the lawsuit and properly identified all damage, both property and personal injury, including nuisance, and after years of litigation, made it to trial. The jury returned a large verdict for the family, rightly identifying with the terrible experience of having hundreds of gallons of sewage destroy their home, a problem that could have been prevented had the city simply periodically check the lines for blockage (something they claim to do in their written policies but in practice they do not).

After the jury read its verdict for the family, the Judge reduced the verdict to $25,000 because the poor family did not list all of the damages in their initial Tort Claim form, even thought their lawyer properly listed all the damages in the lawsuit! This issue is currently on appeal and hopefully the supreme court rules for the family.

Conclusion: Don’t take a chance.  Call us first for a free consultation. We will let you know if your case can be handled without a lawyer.

The lesson from the above example should be clear: always hire a lawyer to file your Notice of Tort Claim, especially if the damage is severe. At the very least, consult with a lawyer to make sure you are not leaving anything out. That way, you can recover the maximum amount of compensation that you are entitled to get under the law (which, because of the caps, is often insufficient anyway).