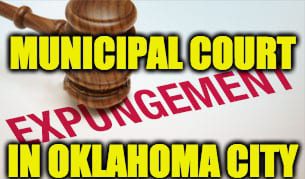 If you were recently arrested or ticketed, and at the top of the citation it says “Municipal Court,” then you are at the right place to learn what you need to know to put all of this behind you and walk away with a clean record. This post is next up in our series on expunging Municipal Court charges in Oklahoma.

Our goal is to help you use this set-back as a set-up for a full expungement so you can walk away with a clear record.

If you’ve been charged in Municipal Court, just be thankful it was not in District Court. You can pretty much represent yourself in municipal court, and we’ve already explained how to represent yourself in a case for marijuana possession (assuming you don’t have prior convictions; if you do, hire a lawyer).

Your goal is to walk out of municipal court with something that can be expunged.

It is our opinion that when it comes to municipal cases, it’s best to opt for a $500 fine instead of probation. So long as the fine does not exceed $500, the case can be expunged immediately. However, if you take the deferred sentence route, you will have to wait until the probation is completed and the case is dismissed, and then another full year after that to expunge it.

Below we will discuss the scenario where you get a deferred sentence in municipal court and what steps can be done to both partially and fully expunge it.

In Oklahoma, Municipal Courts have very limited power to prosecute. These courts do have the power to impose jail sentences but are limited to six months, as discussed above.

Municipal Courts also can defer sentencing and allow probation, but these sentences are limited to six months.

We have previously discussed how the benefit of a deferred sentence is that not only can it be expunged a year after it is completed, but it also qualifies for a 991c expungement once the probation is complete.

Those same rules also apply to deferred sentences issued by Municipal Courts. In a municipal court, that authority comes from Title 11, Section 28-123, which basically says the same thing as Title 22, Section 991c, which is that once the defendant has completed the terms of the probation, the court is to dismiss the charge and direct the clerk to expunge the record.

Once your probation is over with, you may contact us to obtain a partial expungement under 11 OS 28-123, which is the same thing as a 991c expungement. This will change your charge from “Guilty, 6 month deferred sentence,” to “Not guilty, case dismissed.”

Then once a full year has passed, we can file for a full expungement under 22 OS section 18, which is what we seek to do in all of our clients’ cases.

For a free consultation, just complete this form for a free case evaluation. We will review your information and then call you back to discuss your case. You can also call 405-701-6016 and leave a message about your case.